The ghost fleet of mallow’s bay is Southern Maryland’s best kept sightseeing secret. Mallow’s Bay is located in Nanjemoy, MD, with nearly 200 sunken ships above and beneath the surface of the Potomac river, stretching nearly a mile long.

Most of the ships date back to WW1. They were wooden hulled boats that were commissioned by the US Navy for shipping, but they chose the wrong type of lumber, causing the boats to leak. It doesn’t take a genius to realize that a leaky boat is about as useful as, well, a leaky boat, and so the ships were taken to mallow bay, stripped of all metal, and burned to the ground. 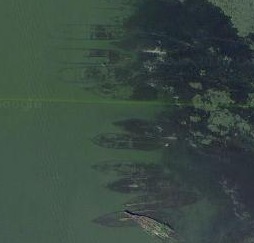 Conservation concepts were different then, so nobody saw a problem with this at the time. It’s since become it’s own artificial reef, and is crucial to the local ecosystem, so there are no plans to do anything with the boats.

Part of what makes this site so interesting is that it includes more than just a bunch of poorly built steam ships. Conservationists have identified at least 88 WW1-era steam ships as well as schooners, work boats and log canoes from the 19th century.

Obviously the only way to really see the ghost fleet is by boat, and there’s no visitors center for the ship wrecks. You can find more information at the Department of Natural Resources site, including the full history of what is probably the largest shipwreck fleet in the world, and located right here in Southern Maryland!

Be the first to comment on "Day 184: Visit the Ghost Fleet of Mallow’s Bay Shipwrecks"