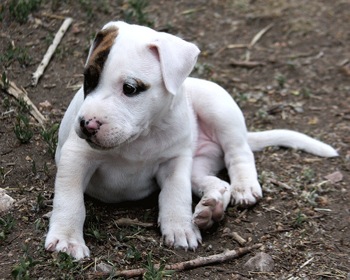 Let me apologize in advance for jumping up on a political soapbox here, it’s not my intent for this little corner of the web, and it won’t be a regular occurrence.

The changes would require these dogs, considered “dangerous”, to be micro-chipped, with chip ID numbers registered with animal control.  Also, any owner who keeps or lets the dog outside would have to fence off all or part of his yard, then create a smaller, locked and secure enclosure for the dog that does not touch the outer fence. If outside the secure kennel, the owner would have to leash and accompany the dog, even inside the outer fence.

The owner also would have to hang a prominent signs warning “dangerous dog” at every entrance to the area and notify animal control if the dog runs loose.

They’ve Got It Wrong

The proposal rubs me wrong on multiple levels. First and foremost, I firmly believe that the myth of “dangerous dogs” is perpetuated by poor ownership, not poor breeding (Although I do not own a Pit Bull, I DO own a German Shepherd, which is another breed often maligned as “dangerous”).  The media has taken a breed that was once considered and unfairly maligned them.

Second, the proposals put forward are completely absurd.  Requiring a dog to be leashed while in it’s own fenced-in back yard?  The whole concept is laughable.  Who’s going to inspect the set-up of an owners back-yard, and what owner would allow a government employee to inspect their private property?  I guarantee you I wouldn’t. In addition, how does tethering a dog at all times help it to be more socialized?  I can’t see a lifetime of restraint making for a more pleasant demeanor.

I don’t believe the government should have the right to limit or restrict our ownership of specific breeds of dogs, particularly when the rationale is based off of more anecdotal evidence rather than proven scientific fact.

What You Can Do

A Facebook fan page opposing this proposal has already been created, and residents can let their voices be heard by contacting the Charles County Commissioners at commissioner@charlescounty​.org to voice your opposition to breed specific legislation.

Most importantly, what are your thoughts as residents of Charles County?  Do you support such proposals, or are you against the local government restricting your (and your dog’s) rights?