This is a goal that’s a little easier said than done, so my apologies in advance, but what an awesome thing to add to your personal bucket list!  Indian Head, MD has it’s own regional airport, and I recently had the opportunity to go flying with a friend of mine who happens to be a pilot and owns his own plane.

I drove down to the airport in Indian Head MD, to meet my friend Nate and get a chance to fly in a small personal plane for the first time.  I’ve known about Maryland Airport for years, but not being a pilot sort of defeats any purpose for going there.  I’m not going to lie, seeing his dinky little plane land was a little bit terrifying, knowing that I was about to be 2,000 ft. in the air in a vehicle that’s every bit as cramped as my Mini Cooper. 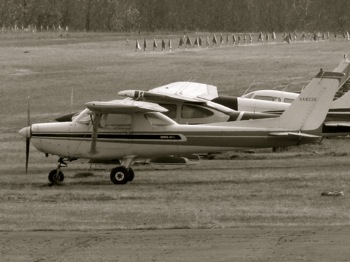 Fortunately, I had nothing to worry about.  I managed to film our takeoff, the video is available at the bottom of the page, and I was thrilled to get a birds-eye view of Southern Maryland.  What a great way to put the entire region into perspective! (for the record, yes, I could see my house, yes, I know that makes me a nerd, and no, I don’t care.).

So here’s what I recommend you do:  Find a friend who has a pilot’s license, preferably with their own plane.  If you don’t have a pilot friend, make one (I don’t have any suggestions on how to do that, sorry.).  Getting to Indian Head is the easy part, and make sure you plan plenty of time.  My friend Nate is the easygoing type and once he’s in the air he doesn’t like to rush heading back.  It seems to be a typical pilot thing, as Nate once told me that “Before he owned a plane, he had to find a reason to go flying.  After he bought it, he had to find a reason to NOT by flying”.  Words to live by, in my book.

(Fair Warning, little 4 seaters like this are very loud and fairly bumpy.  The video is a certain reflection of such conditions)

Be the first to comment on "Day 28: Go flying in Southern Maryland at the Indian Head, MD airport"